Clubs and other extra curricular activities are run on a variety of days by our teachers and are open to all members of the school as indicated in the clubs letter below.

We aim to provide an exciting and engaging extra-curricular timetable which is matched to the children’s interests and needs. We encourage and support children to reach their full potential, providing a stimulating and interactive extra- curriculum timetable.

Our before, during and after school activities include the following opportunities:

The children learn how to correctly handle a bow and arrow and develop hand eye-co-ordination. They part in a variety of fun competitions/games against peers, which builds self-esteem and gives them a sense of accomplishment. Archery is also great for improving focus, patience and even math skills.

ActivAll is the fantastic high-impact reaction wall, designed for fitness, health, and fun. Combining movement, action, coordination, and problem-solving, ActivAll is acknowledged as a unique inclusive fitness tool, giving everyone access to exercise regardless of ability, age, or fitness.

Hi everyone, Mr Harris here and I’m so excited to start basketball club with you all! We will train our on the MUGA after school on a Wednesday and practise your dribbling, passing and shooting skills. It will be an excellent chance to keep fit, improve your basketball skills, make some new friends and also try our for the basketball team! Look forward to seeing you there!​

Have you ever wondered how to play a particular board game but never got round to it?

Board game club is a fantastic way to meet up with friends or gain new friendships playing board games and most importantly having fun. 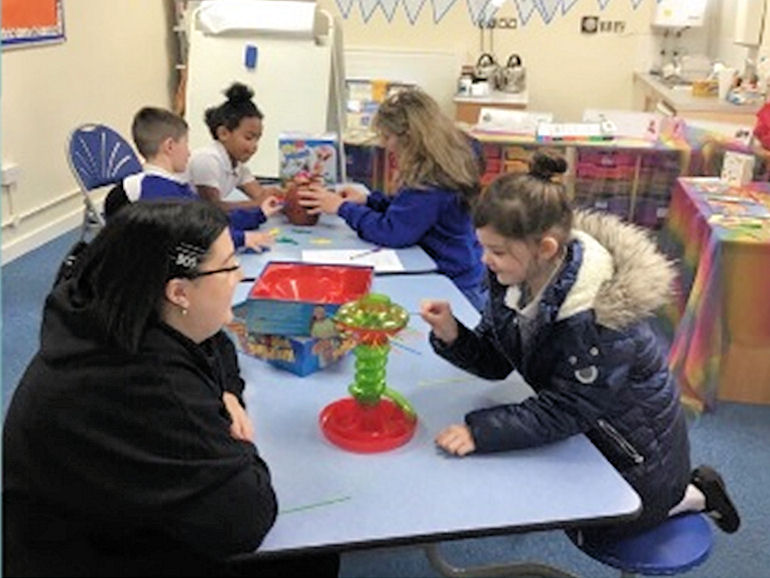 Boxing club is a fun, energy burning club and pupils will gain knowledge of the sport boxing. The children will take part in active exercises each week. Also the children will learn self-control and improve self-confidence. 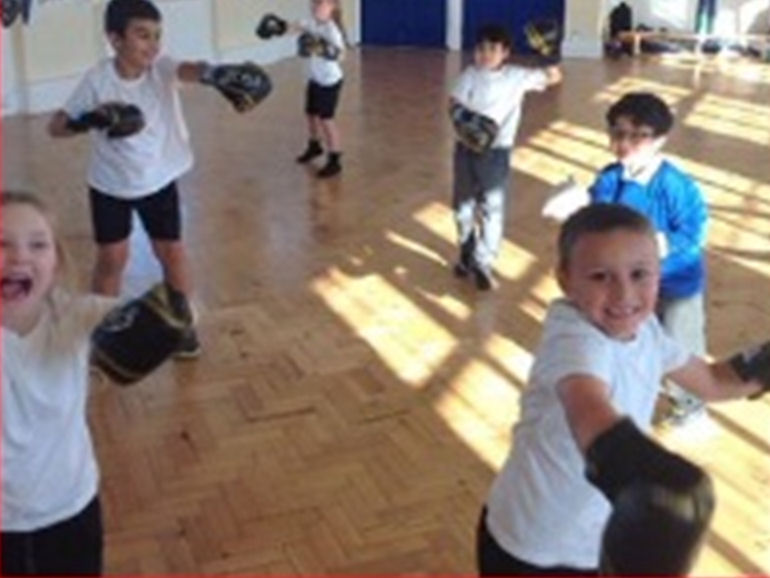 Health for Life club gives our children an opportunity to explore how we can live a healthy life.

Our intention is to help children think about how active their lives are, what they eat and how we can educate others to make good choices.

The Arts and Crafts club is an opportunity for the children to come and express themselves creatively, regardless of their artistic abilities.

They will get to make a range of creative pieces based on a theme such as ‘Bonfire Night’ and will be able to choose from different materials and techniques. The children will be encouraged to mix with different age groups and the atmosphere will be relaxing yet fun. 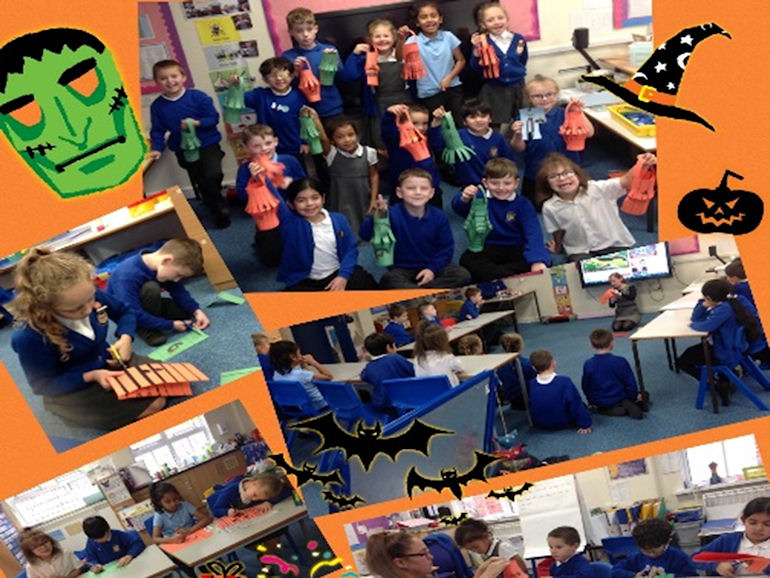 A lunchtime club that is a fun way of doing exercise. You can make new friends, sing along to your favourite songs, and have learn some new dance moves.

Dodgeball club is run every Wednesday morning and is open to all from Year 3, 4, 5 and 6.

It is a fun and fast game that requires lots of stamina. We have been practising lots and improving our skills.

During film club, children will be given an opportunity to watch a range of genres: comedy, Science fiction, documentaries and many more. Hopefully, this will not only develop the children’s interest and enjoyment of films but also develop their understanding of visual literacy skills.

The children can bring their own snack and drink, then sit back, relax and enjoy​.

Football Club was organised by holding trials for the Paget Football Year 3 and 4 Team, 5 and 6 Team and a Girls Team.

Each week involves player and team development. It includes practising individual ball skills, developing their levels of fitness, improving self-confidence and understanding football as a game. The children have the opportunity to build upon our sporting values of teamwork, determination, passion, self-belief, respect and honesty. 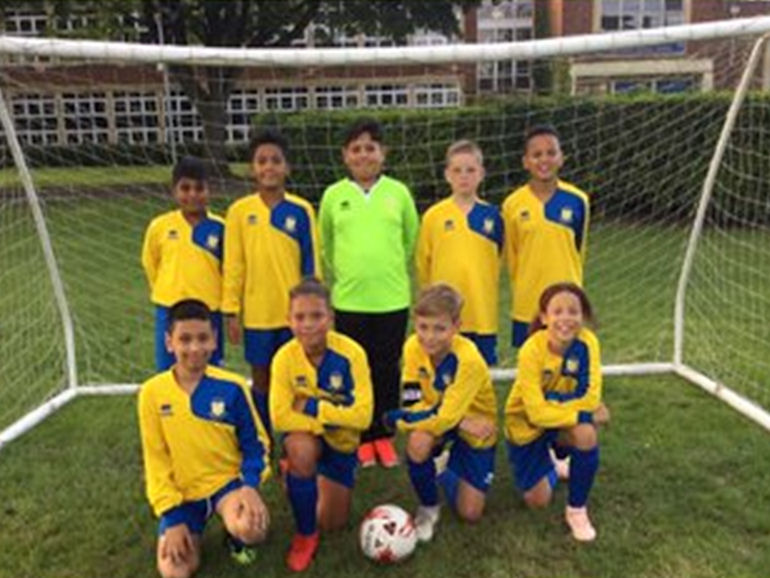 Is a place where you can come at lunchtimes. You will learn how to relax, play games, learn some new skills like how to calm yourself down and how to be a good friend. The most important thing is that you will have fun and make new friends. 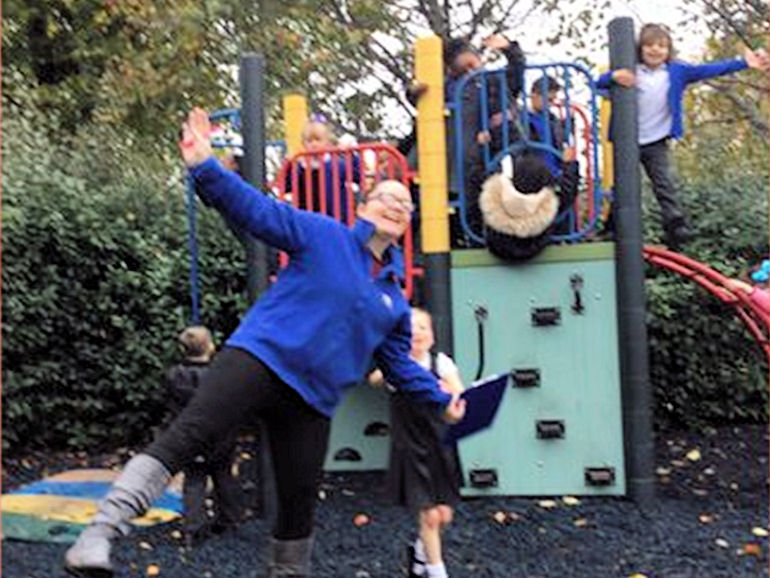 Miss Forbes invites all girls from year 3 upwards to join Girl Power. It’s a girls only club where you will learn new skills make new friends and learn how to be a leader. (For the girls in year 5 and 6. The girls in year 3 and 4 will be training for the leadership roles)

You will have a choice of the new activities that we will be learning and have a chance to meet new children from other schools that are also part of of Girl Power in the Birmingham area.

At Gardening Club, we encourage the children to learn about healthy and sustained vegetable growing.

We grow arrange of vegetables including, potatoes, onions, lettuce and much more. We also learn about the process and preparation for growing a good crop and put this into practice.

When the weather turns colder, we concentrate are making the garden area look tidy and liven it up by making scarecrows and other outside features. 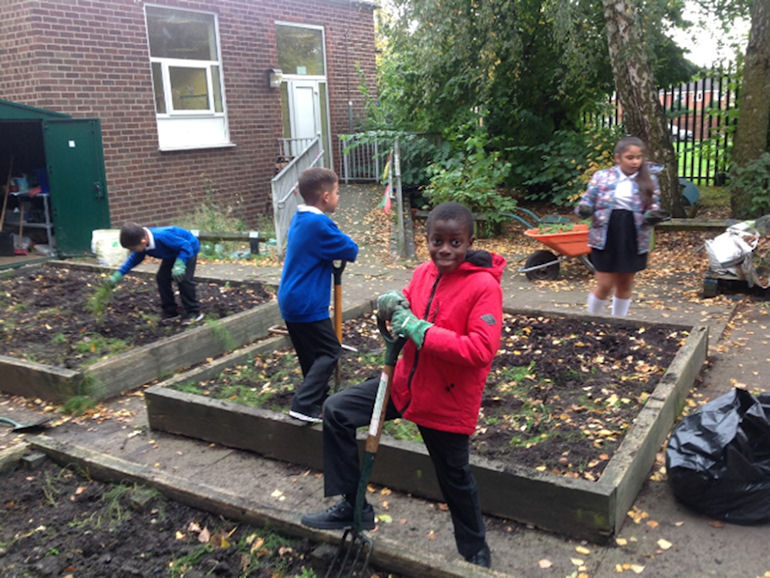 Have you ever wondered how to play a particular board game but never got round to it?  Would you like to chill, be mindful and chat?  Is there something you would particularly like to make.

Join games and craft club where we can meet as friends or gain new friendships playing board games, chilling and being mindful or making things but most importantly having fun!

Children will learn multiplication and division facts, through interactive games and TT Rockstars. This will also help develop their understanding of multiples and factors. The more practise the children receive, the more they will be able to use quick recall to apply in other areas of Maths. The club is designed to help the children easily learn key facts whilst keeping it fun and engaging.

At multi – skills we will be providing the children with a range of exciting and fun games. Some of these games will include basketball, dodgeball, rounders, running and obstacle courses, etc. The aim is to learn and develop new skills to support them. This will help build confidence and social skills. Looking forward to it!

Net and wall games club include activities such as badminton, tennis and volleyball and a range of fun games.

Netball Club is run by Mrs Nussey and takes place on a Monday after school.  Netball club is open to all children from Years 4, 5 and 6 and we play outside most of the time, including in the cold weather so make sure you have warm PE kit for our sessions.

At netball club, we teach the children how to play traditional seven-a-side netball as well as High 5 Netball.  We also practise ball skills, tactics, drills and play mini matches. The children learn to play in all the positions in a team and practice attacking, defending and shooting.

In netball we develop and put into practise all of the school and sporting values through the competitions, leagues and friendly matches we play.

It’s a great way for the children to get active, enjoy themselves and make new friends – oh and Mrs Nussey has a great time too! 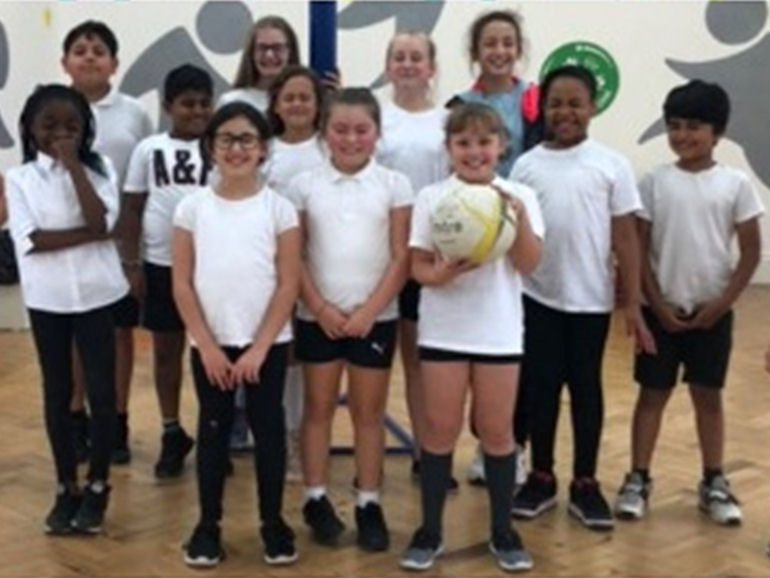 Olympic Legacy is for our Gifted and Talented pupils in KS2. The children have a regular weekly club to develop their sporting talent. At Paget we have lots of different sporting teams. Our teams are represented in three levels:

Working together, accepting decisions and understanding that people have different abilities allows us to grow up to be confident and active. We follow the Sainsbury’s School Games values, which are: Honesty, Determination, Teamwork, Respect, Passion and Self-belief. 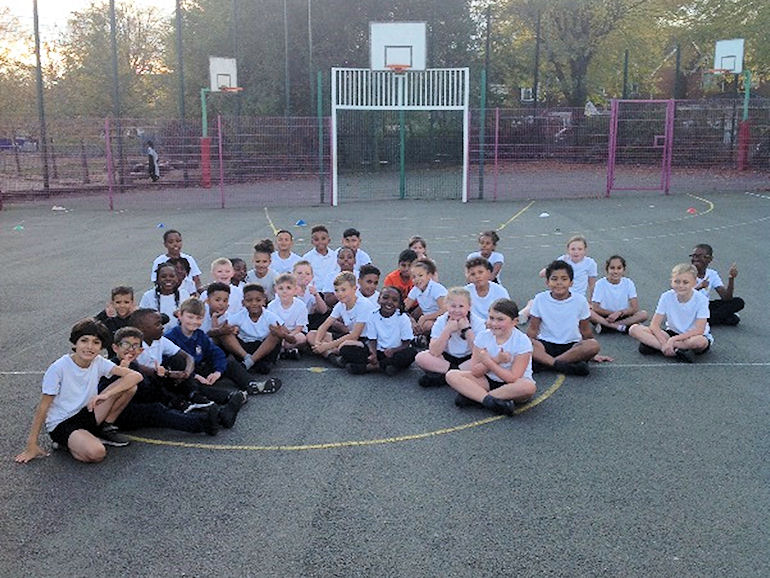 Paget Primary Reading Club is an opportunity for pupils to discuss, read and explore their favourite books as well as any new books they would like to read. There will be a variety of activities available for the pupils linked to the texts we choose to read together. At Paget Primary Reading Club pupils will talk, ask questions, and interact with each other developing their love for reading, building their confidence with peers and learn new skills.

As well as reading a variety of texts, where appropriate, we will also enjoy going to see books brought to life at the cinema as well as the theatre.

Ever wondered how to make water walk? Or how a potato can power a clock? I want to be a scientist club will explore this and many other interesting questions about our world. From animals to plants, to magnets and materials, we investigate all aspects of the wonders of science. Some weeks may be more practical than others but every week we will find out (hopefully) something new.

Lots of people find singing makes you happy. At Sing and Sign we will be singing some of our favourite assembly songs and some of the ones you listen to at home. Learning actions is a really fun way to help us remember the words. The actions we use are from the language program Makaton this is a great skill to have, and maybe we can teach others what we learn in singing assemblies!

Striking and fielding games are activities in which players score points by striking an object, and running to designated playing areas. Or, they try to stop their opponents from scoring by catching the object and returning it to stop the play. Such games include Cricket, Baseball and Rounders.

Tag rugby takes place on a Monday after school.

The sport originates from rugby league and substitutes the tackling for a belt with Velcro tags. This means tag rugby is not a full contact sport but instead minimal contact.

The aim is to teach the KS2 children the basics of rugby and the values that go along with it such as, team work, courage, resilience, confidence, determination and perseverance. The lessons will be fun and active lessons that the children will always walk out of it sweating.

The Vigor Board is an exciting new alternative to the traditional physical activities.

In wow wow wow club we will be having lots of fun! There will be painting, dancing, games, drawing and craft making! We are very excited about doing lots of wonderful activities with Reception!

Our Young Leaders are represented by Year 5 and 6 pupils who work on various lunchtime activities across Foundation, KS1 and KS2.

The Young Leaders use a variety of games and activities to support and engage pupils in a fun, safe and active lunchtime. The children have the opportunity to build upon our Sporting values of teamwork, determination, passion, self-belief, respect and honesty. 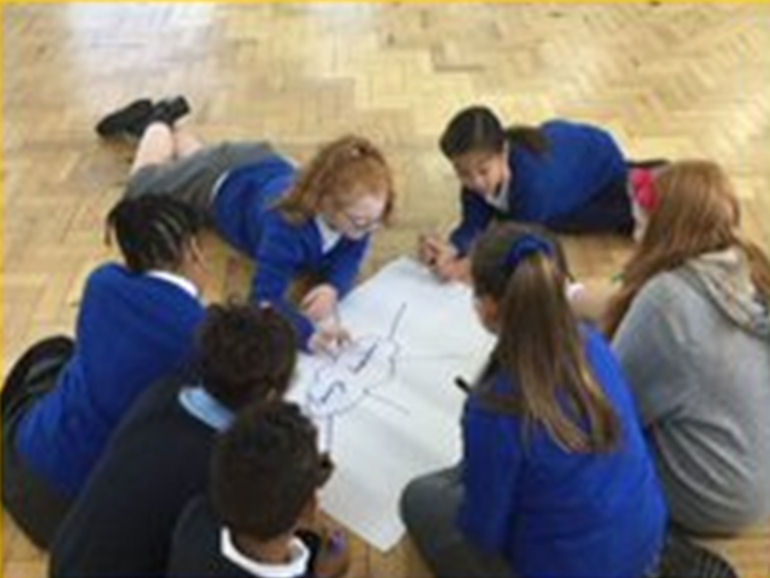